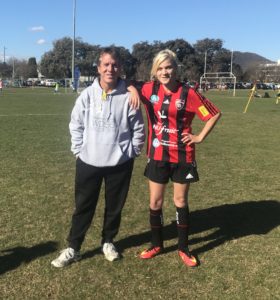 The Wangaratta District Specialist School (WDSS) soccer team has participated in the Kanga Cup in Canberra, the largest international youth football tournament in the southern hemisphere.

The Kanga Cup was held from 8-13th July and is a week of fun, friendship and football, and certainly kept the team from WDSS busy! The team comprised of Scott Sessions, Zak Andrewartha, Tyreece Rhodes-Orton, Zak Holmes, James Paul (captain), Kira Banks, Liam Mossop and Dakoda Leavet Brown. The team competed in the Summerland Football Athletes with Disability (AWD) Division, which was introduced at the Kanga Cup in 2012, providing the opportunity for people with disability to be part of this great event.

The team arrived in Canberra on day one, ready to jump off the bus for their first match against 2017 winners, New South Wales (NSW). Down 2-0 at half time, WDSS was feeling the pressure in the back line and in goals, as team NSW gave it everything. The second half was similar as NSW pushed for a win, finishing the game 5-1 with Tyreece Rhodes-Orton scoring one goal for WDSS.

There was no rest for the team as they were straight back on against ACT Special Olympics Team, but were ready for battle in their second game taking a 5-0 lead at half time and went on to win the match 5-3.

Day two saw WDSS play two teams from South Australia, which would decide their placings in the pool to make finals over the coming days. South Australia One Culture were too strong for WDSS in their first game of the day, kicking seven goals to one and proved themselves to be a finals contender to take out the cup.

It came down to the last match of the day against South Australia Special Olympics Team. WDSS had a nervous start, going down 0-1 into half time, but the team put up a fight and got back into the match, resulting in a 1-1 draw. This was enough for WDSS to qualify 3rd and make it to the semi-finals.

Semi-finals took place on day three, where WDSS had to face NSW again. NSW scored two early goals, before Dakoda Leavet Brown from WDSS scored the goal of the tournament which involved taking the ball off the opponent, dribbling past two players, passing off and receiving the ball back to hammer into the net. NSW ultimately won the match 4-1 to make the grand final, which was won by the formidable SA One Culture.

Team Coach, Jack McNeilly said, “The Kanga Cup is a fantastic event and a great event for us to be a part of. I’m really proud of the team – all of the teams we’re playing against are representing their state or territory and our team was all from the Wangaratta District Specialist School in north east Victoria, which is just awesome. For us to make the semi-finals is brilliant and it’s such a great experience for the team to play against these teams, travel to Canberra and get some high-quality matches.”

If you have a story about sport from your school or club you would like to share with the community, let us know by emailing sportnortheast@thecentre.vic.edu.au