News • What's On Offer for Sporting Clubs and Active Recreation 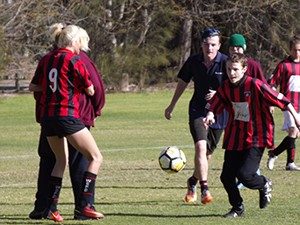 It was a fun and successful day for all schools and adult teams that participated in the All Abilities Soccer Gala Day on Friday 22nd June at the South Wangaratta Reserve.

The schools competition featured teams from Wangaratta District Specialist School (WDSS), Belvoir Special School, and Cobram Special School. At the end of the competitive but friendly matches, WDSS 1 emerged on top of the table.

Organised by Valley Sport and Sport North East, we could not have had such a great day without invaluable support from:
Wangaratta City Football Club
Murray United Football Club
Atila from Football Federation Victoria
Galen Catholic College
And of course all of the players, teachers, friends and family who travelled to participate. Thank you and congratulations to everyone involved.